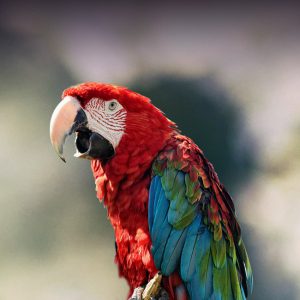 LIFE EXPECTANCY: 50 years; however, there have been reports of green-wing macaws living well into their 80s

The greenwing macaw is among the largest macaw species. Its large beak can be intimidating, but this macaw has a reputation as a gentle giant.

At about 35 inches from its crimson head to the tip of its tapered tail. And weighing in at between 2 1/2 to 3 1/2 pounds. So the green wing macaw is one of the largest birds in its genus. And so  almost as large as the Buffon’s macaw or the hyacinth macaw. Of the larger macaws, the green wing is possibly third most popular large macaw companions, after the blue-and-gold macaw and the scarlet macaw.

So the green wing Macaw has, not surprisingly, a band of forest-green at the center of its wings; below the green is a bright turquoise and above is a cherry-red that extends up and over the whole of the bird’s body and head; the flights are dark blue and the tail is very long and is comprised of blue and red feathers. The beak has a black lower mandible and a horn-colored upper mandible and is formidable in size, able to crack difficult nuts with ease.

So this big beauty hails from regions in Panama, Colombia, Venezuela, Ecuador, Guyana, Brazil, Peru, Suriname, French Guiana, Paraguay, Argentina. And Bolivia, and covers roughly the same area as the blue-and-gold macaw. Its wild diet in the tropical lowlands is much the same as that of the blue & gold’s, including fruit, seeds, berries, and nuts. The green-winged macaw also feeds at the famous “clay cliffs” known for their high mineral content said to neutralize toxins.

The green wing’s size alone is a deterrent for many bird owners, who don’t have the room for such a large animal. The green-winged macaw needs a very large cage. Stainless-steel cages are now becoming popular and more affordable, and are a good material for green-wing housing; this bird can easily bend or break the bars of a cheaply made cage. Powder-coated cages are fine, too, if they’re well-made, and the bird will greatly appreciate a cage with a play top.

Green wings get along with most other macaws their size, so keeping two macaws together is fine, but don’t allow birds of different species to breed.

Macaws, including green-winged macaws, thrive on a nutritionally balanced diet, such as Lafeber’s Nutri-Berries and Lafeber’s Premium Daily Diet Pellets, as well as fresh fruits, vegetables, and healthy table foods. If properly fed and cared for, a green-winged macaw is reported to have a life span of more than 70 years.

That great big beak can look intimidating, but the green-winged macaw is actually the gentler of the large macaws, not known for biting and massive mood swings. A well-raised green wing, one that’s healthy and well-treated, is a pleasant companion and long-time friend, with a life span of more than 70 years.

The green wing can talk, but is not known to be a chatterbox; instead, an owner can expect intermittent screaming, which is quite loud, but not persistent, that is, if the bird is being cared for properly. An unhappy green wing can cause a ruckus that will get someone tossed out of an apartment building.

Like other parrots, green-winged macaws are prone to self-mutilation/feather plucking, nutritional disorders, and a variety of diseases, including Proventricular Dilatation Disease (Macaw Wasting Syndrome), as well as overgrown beaks. A nutritionally balanced diet and regular veterinary health exams can help keep your green-winged macaw healthy and thriving.

Green-wing macaws are tame and affectionate with a usually even, easy-going disposition. They are friendly and require a couple of hours of interaction with you every day. These birds are brilliant; they can learn to speak words and do tricks.

As one of the largest species of parrot, they have incredibly powerful beaks. Although they are among the most gentle parrots, a green-wing macaw with behavior problems can be a biting hazard for families with little children (and little fingers). Most species of parrots will develop behavioral issues if they do not get sufficient attention from you or their human flock.

The green-wing macaw can be taught to speak about 15 words but is not known for its talking ability. This bird will screech and scream, for example, when it gets excited, feels threatened, or wants attention. This bird can get loud. This species is an unsuitable companion for those who live in an apartment or other close quarters.

The green-wing macaw is one of the most recognizable of all the parrot species. These bright birds are a deep vibrant red on the head, shoulders, and breast with a greenish band below the shoulders and wings. The green band transitions to dark blue on the wings, and there is light blue on the rump and on the tail feathers.

The long tail feathers are red, tipped in blue. The legs and feet are a deep gray, and the beak is  with a black lower mandible. The bird has eye patches on the face. Males and females are indistinguishable, except that males are slightly larger. To figure out the sex of the bird, it will need DNA testing or surgical sexing.

Green wing macaws, like other macaw species, are susceptible to some diseases, including:

So other problems that are less serious include allergies and behavior problems. Such as feather plucking, which usually occurs in parrots that are bored or frustrated.

Although they are not as active as other large parrots, green-wing macaws still need plenty of exercise for both mental and physical stimulation. You will need to provide 2 to 3 hours of supervised out-of-cage playtime daily. Provide a separate playpen structure away from the cage for exercise periods.

Make sure that you keep a close on your birds while they are out of the cage. Green wing macaw  is known for being voracious chewers and can chew through a door frame or expensive molding with lightning speed. So you should invest in some good-quality chew toys and be ready to keep resupplying them, as these are disposable items where macaws are concerned.